I have a new roommate. His name is Jesse. 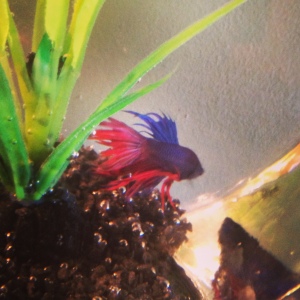 Jesse the fish. Named after Jesse from Hit List (but conveniently works as a reference to Full House, Gilmore Girls and a favourite Broadway actress)

I own a fish. This might be shocking to some of you. If it’s not, let me tell you why it should be:

But then I got it in my head that I wanted a fish. I did research and thought a betta fish would be a good starter pet for me. I could probably keep it alive and they’re pretty (high standards, right?). Besides, how emotionally attached can you get to a fish? So Monday after work, I went to the pet store to buy a fish.

The young sales associate took pity on me (or, more likely, on the fish who was drew the short straw to get me as its owner), and walked me through everything I needed. After convincing her that I would change the water weekly and therefore could get the fish bowl instead of the aquarium, she bit her lip and handed me a how to care for your betta pamphlet.

At that point, I decided against asking my second question: “how long can I go without feeding it?” I’m pretty sure she would’ve asked me to leave and put me on PetSmart’s “do not sell to” list.

After a stressful drive home (for both me and Jesse) and trying to figure out if the gravel or water goes into the fishbowl first (I still don’t know), I transferred Jesse to his new home…and then spent the next 30 minutes watching him swim around.

Guys, I have shocking news. It’s been 24 hours and I’m turning into one of those pet people.

I’ve taken pictures and put them on Instagram. I referred to Jesse as my mom’s “grandfish” when I told her about him. At work today, I found myself wondering what he was doing (spoiler: the answer was “swimming”…he’s a fish).

Sigh. Maybe I’m coming around to the whole pet thing. Maybe I could handle a cat…but not until Jesse dies…which could be a while – did you know they can live up to three years? I read that part of the pamphlet after I got home.

This entry was posted in Uncategorized and tagged betta, fish, pet people, pets. Bookmark the permalink.

Firefly Beat
All Toqué'd Out

The journey with a child who has a life-limiting condition

We've all got a story to tell.

More Than We Ask

Seeking beauty in our everyday in Zambia

LARGER ON THE INSIDE
Allison Vesterfelt
Tricia Lott Williford

chatting at the sky
MICS It Up

The Percy family in Zambia

The Adventures of ALi!

what shenanigans will she get up to next?

A bucket list blog: exploring happiness, growth, and the world.