What I learned at camp

Camp Oki transformed me. Deciding to spend a week of vacation volunteering here was one of the biggest batches of butterflies I’ve ever chosen.

For a girl who spends 40+ hours a week inside a cubicle, my week at camp was about as opposite from regular life as it gets. 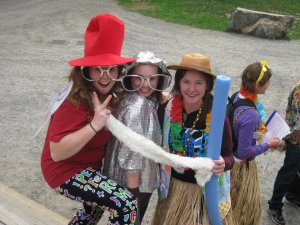 Just an ordinary day at camp…

For one week a year, I sang silly songs, made up dances, and starred in skits. I mediated 11 year-old drama and mastered the art of keeping pre-teen boy/girl friendships in the friend-zone.

I navigated difficult conversations about congenital heart disease and how that might impact future dreams and ambitions. I still remember when one of my campers answered “not yet” to another camper’s question “have you had a heart transplant?”

Because of Camp Oki, I know the difference between a pacemaker scar, an ICD scar, and an open-heart surgery scar. I know what the Fontan procedure is, and not to panic when a camper’s lips are bright blue – that happens when heart kids are cold.

Because of Camp Oki, I know six different friendship bracelet braids, I know how to properly belay a rock climber, and all the words (and moves) to Ice Cream and Cake, Pizza Man, and Squashed Banana. I know all the variations of Boom Chicka Boom, and I’m really good at keeping my elbows off the table.

Because of Camp Oki, I know I can be “on” from 7am to 11pm (and sometimes beyond those hours) for a week straight. I discovered how a supportive community can make people brave. And I know that we are all so much stronger than we think we are.

But this year, choosing butterflies meant not going to camp. It meant trusting my heart when I felt I was “done”, even though I didn’t really understand why. I had given all I could to Oki, and it was time for me to move on.

Camp Oki transformed me as much as it transformed each and every camper. I’m so grateful for that, and am holding on tight to it this week.

Because none of my meals this week involve chanting, screaming and dancing. And it feels a little weird.

Firefly Beat
All Toqué'd Out

The journey with a child who has a life-limiting condition

We've all got a story to tell.

More Than We Ask

Seeking beauty in our everyday in Zambia

LARGER ON THE INSIDE
Allison Vesterfelt
Tricia Lott Williford

chatting at the sky
MICS It Up

The Percy family in Zambia

The Adventures of ALi!

what shenanigans will she get up to next?

A bucket list blog: exploring happiness, growth, and the world.